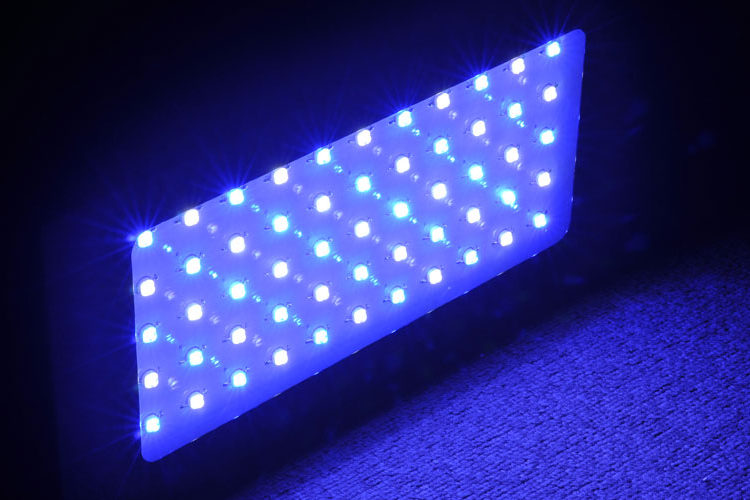 with what look like glowing sheets of paper. The company’s first commercial product is a two-by-four-foot-square light, which it plans to start shipping to select customers for evaluation by the end of the year.Fine print: The lights shown here are made of tiny LEDs printed on a surface using standard screen printing.

The technology could allow for novel lighting designs at costs comparable to the fluorescent light bulbs and fixtures used now, says Neil Shotton, Nth Degree’s president and CEO. Light could be emitted over large areas from curved surfaces of unusual shapes. The printing processes used to make the lights also make it easy to vary the color and brightness of the light emitted by a fixture. “It’s a new kind of lighting,” Shotton says.

Nth Degree makes its light sheets by first carving up a wafer of gallium nitride to produce millions of tiny LEDs—one four-inch wafer yields about eight million of them. The LEDs are then mixed with resin and binders, and a standard screen printer is used to deposit the resulting “ink” over a large surface.
In addition to the LED ink, there’s a layer of silver ink for the back electrical contact, a layer of phosphors to change the color of light emitted by the LEDs (from blue to various shades of white), and an insulating layer to prevent short circuits between the front and back. The front electrical contact, which needs to be transparent to let the light out, is made using an ink that contains invisibly small metal wires.

The new transparent electrical contact could itself prove important as a replacement for the indium tin oxide (ITO) used in touch screens and other displays. ITO is brittle and can’t be printed, so it’s not suitable for flexible displays. It can also be expensive, depending on the price of indium.

Shotton says the efficiency of the lights has been steadily improving in recent months. The goal is 50 lumens per watt for the first products and 75 lumens per watt by next year, which is comparable to many other LEDs. The best LEDs today get over 200 lumens per watt.

Printing with inks composed of tiny working LEDs produces much brighter light than depositing powders or thin films of electroluminescent material, two approaches that are already used to make flat night-lights and the greenish backlights on digital watches, and more recently to illuminate billboards with a white backlight.

Raghu Das, CEO of IDTechEx, a research firm that specializes in printed electronics, says printed-ink lights could be cheaper than the organic-LED (OLED) lights that have started to come on the market. OLED lights are expensive (one desk lamp costs nearly $6,000), and they have to be sealed inside rigid glass to protect the organic molecules from air and water.

The new design also makes the bulky heat sinks used on conventional LED lights unnecessary. Since the tiny LEDs are thinly and evenly distributed, the lights don’t get hot, Shotton says. The advantage of not having a heat sink is, however, offset by the fact that the LEDs require a substantial power source. To incorporate this power source, the company’s first light fixture will have to be two inches thick, even though the light-emitting surface is thin and flexible.

Use our form to estimate the initial cost of renovation or installation.

Nthedegreetechnology Repair Service is proud to provide superior customer service and appliance repair to clients in the city and surrounding areas. Specializing in all major appliance repair